An Assassin’s Creed Revelation player finds a hidden aspect behind a memorable in-game site that may have connections to original game.

Assassin’s Creed Revelations brought players to Constantinople, full of interesting characters and teeming with history. Constantinople is also the home to the Venetian-Ottoman book owner Sofia Sartor. Her run-ins with Ezio Auditore prove to be important part of the game’s story, but it is her book store that caught the eye of players recently.

Assassin’s Creed Revelations was released in 2011 and is the conclusion to the trilogy of Ezio Auditore games. Often in Assassin’s Creed games, players can stumble upon famous sites that take on a different meaning to match the overarching lore of the series. Assassin Bureaus are the hidden local chapter’s headquarters, and their distinctive design from the first game included a roof-top entrance.

Reddit user ronin_tm recently posted a screenshot of Sofia’s bookshop’s roof, and it has sparked the interest of the Assassin’s Creed community. The roof of this building should bring players right back to the first game in the series. Players recognize that the roof looks incredibly similar to the numerous Assassin Bureaus scattered across the in-game world of Assassin’s Creed. This has led players to speculate that her book shop was formally one of these bureaus, converted to a shop some time before the game. 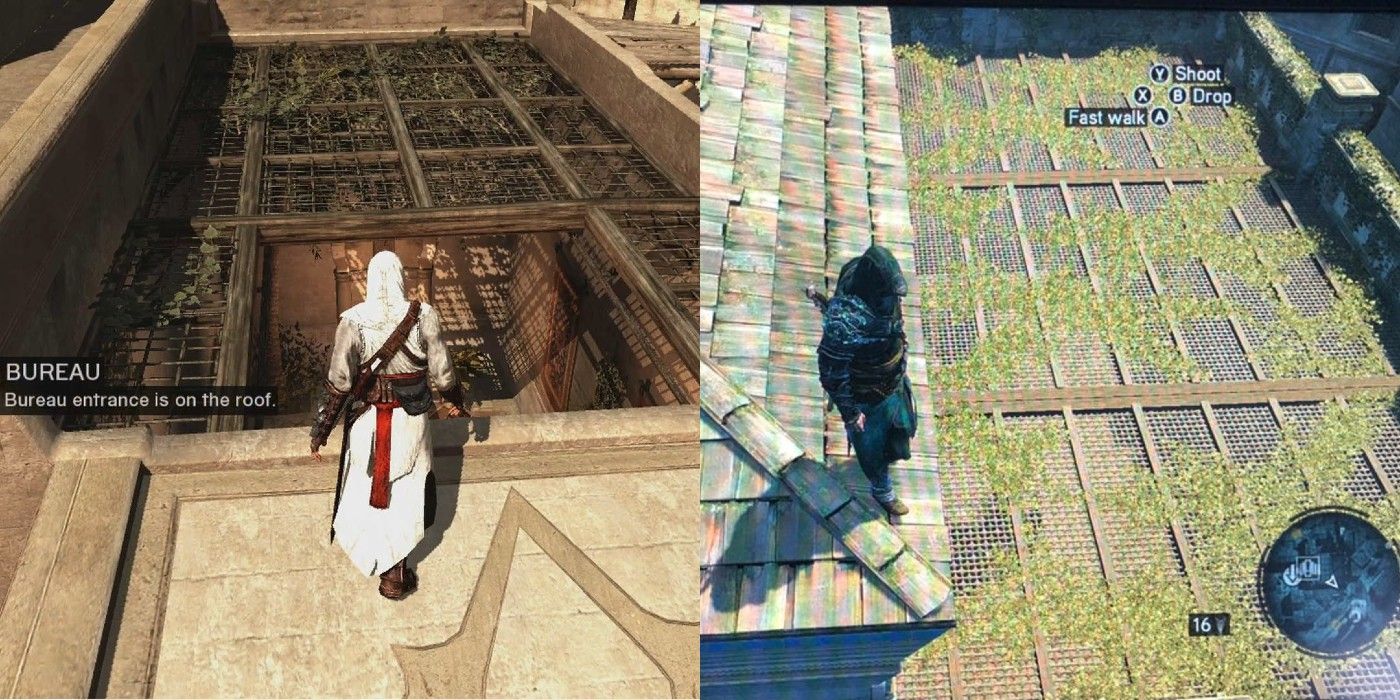 The original Assassin’s Creed, released in 2007, took players to cities such as Jerusalem and Damascus and had players visit local Assassin Bureau to start their missions. These places were only accessible through the roof and had a distinctive lattice to help differentiate them from other buildings. This curious player is was correct, as Sofia’s bookshop was previously owned by Niccolo and Maffeo Polo. These figures were originally tasked with creating a trading post as well as an Assassin Guild in the city many years prior to the events of Revelations.

What the screenshot shows more than anything is the recognition that remains from the original game in the Assassin’s Creed series. Though often overlooked because of the quality of the games that followed, the first Assassin’s Creed brought a number of iconic moments and imagery to the series.

That being said, Assassin’s Creed did have its limitations. Players have often found the combat and the story missions repetitive and the main character less memorable than Ezio. Either way, this connection between the original game and Assassin’s Creed Revelations is a reminder that the community still finds new revelations in older titles to this day.

Assassin’s Creed Revelations is available now for the PC, PS3, and Xbox 360.

Is GTA 5 Online shutting down? All you need to know

Does the distressing news about GTA 5 Online shutting down have any substance? Ever since Rockstar announced that it would be ending support for PS3 and Xbox 360 versions of the game, fans have […]

Titanfall is unplayable on PC, but Respawn has put in an employee or two to fix it

That cheats and hackers have taken advantage of the vulnerabilities of Titanfall’s servers (the first, above all) is a well-known problem within the community of the already veteran title. Respawn Entertainment, the studio responsible for […]

It has been almost a decade since Chivalry: Medieval Warfare was released on multiple platforms, as a game that has its roots in a Half-Life mod. Tom Banner Studios has finally produced its sequel, Chivalry II, […]