It seems like when we were young, the idea of time travel was so exciting! Who didn’t love the idea of going to the past to kick it with some dinosaurs, or jumping way into the future to befriend a wisecracking robot? Nowadays, the concept of time travel is one of extreme stress and consequence. One small action could upset the entire balance of reality, or potentially create an infinite sequence of branching realities—depending on your beliefs of singular timeline, or multiverse theory.

When I first saw Cris Tales, I had high hopes for it; initially intrigued by its unique artstyle and time bending mechanics. It conjured up memories of Chrono Trigger; causing me to realize we really haven’t had an interesting game where time travel was the central mechanic. However, after countless hours with Cris Tales, I find myself exhausted and in no hurry to have a future with it.

Cris Tales has a lot of good ideas, but it is a mess of game design. Usually in my reviews, after my initial anecdotal intros, I’d begin by describing the game’s story; however, after 40+ hours with the game, I could not begin to tell you what the central plot is, or what’s at stake. Everything happens so quickly; with almost no build up, and even less exposition. It’s incredibly awkward—most notably in how the game begins.

Cris Tales begins by throwing players right into a combat encounter, in a seemingly dire situation—the local farm has been set ablaze by goblins. However as soon as players encounter an unbeatable boss, the game flashes back and rolls the title. Now, RPG’s starting players in a battle with an unbeatable boss—or what might seem like the final boss—is nothing new; but usually it’s done in a way to communicate some crucial plot details; backstory, things/characters that will become important, what’s at stake, as well as giving players some understanding of the combat.

“In Cris Tales the intro fight establishes nothing, and what’s even more baffling is it flashes back to what would amount to maybe an in-game hour.”

However, in Cris Tales the intro fight establishes nothing, and what’s even more baffling is it flashes back to what would amount to maybe an in-game hour. So it makes one wonder why it’s even there in the first place? Is it some kind of meta time design? The repetition of events? No. None of that is established through the game’s time mechanics. Even more crazy is after the fight, it goes to a little story moment and it rolls the title again like that’s where the story ACTUALLY starts.

And everything else in the plot happens with that same level of awkwardness—Crisbell, the game’s main character, just receives her powers after going into a Chapel, and it’s never really remarked upon or expanded in any meaningful way. There’s an off-hand mention of an “Empress of Time,” who apparently wants to destroy the world for…reasons? When danger happens, Crisbell is given a sword we’re told is way too powerful and dangerous for her to weild, but then she just gets it like “no big deal.” It’s not to say it’s a bad story, it’s just so poorly told I have almost no interest in following up on it. 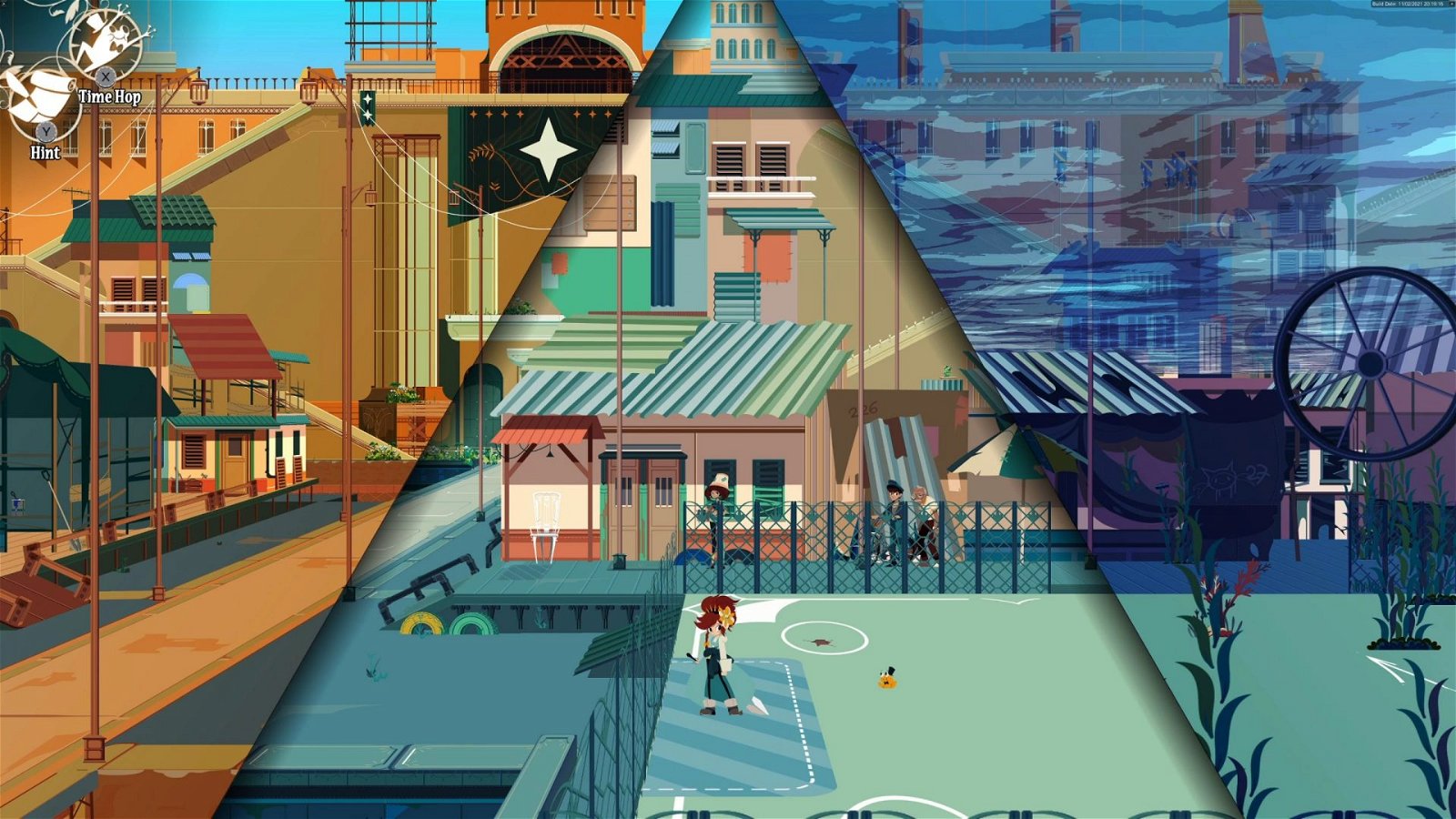 Cris Tales – ModusWhere Cris Tales really stands apart is in it’s gameplay…well kind of. The main gimmick of the game is the way, in certain areas; players can simultaneously see the past, present and future. This works in several different ways, as players can utilize elements of the past and future to solve problems in the present, and re-write the future for the better. However, it’s not an element without consequence, as players must make specific choices as to who to help, resulting in different futures and even different endings.

It’s a truly interesting system, adding a lot of interesting detail to the world as you move through it—seeing what was and what grim future awaits. However it’s limited by the way players interact with the various time-periods. As far as I can tell, given my time with the game, Crisbell can only exist in the present, and must send their talking frog companion, Matais, into the past or present to interact with specific objects, or listen to specific conversations. I can’t help but wish there was more to this—specifically that I could interact with every character in the past or present, which would add so much more to the story. It just feels like so much wasted potential to flesh out the narrative in interesting ways, especially considering how every dialogue interaction is fully voiced; I wonder why they didn’t take that extra step.

Then of course is the aforementioned combat. It’s not terrible, but it definitely leaves a lot to be desired. While it’s fairly straightforward—even drawing inspiration from Paper Mario with timed hits—it doesn’t feel very balanced, particularly early on in the game. The timed hits themselves feel pretty ineffectual, and timed blocks are a bit of a mystery—sometimes it’ll tell you “defend” other times it says “parry,” but I haven’t been able to ascertain any difference between the two. Even for an RPG, fights feel incredibly slow, despite timed blocks, certain enemies can wipe your health in a couple of hits; and fights become pretty monotonous as you go through the motions of attack strategies. 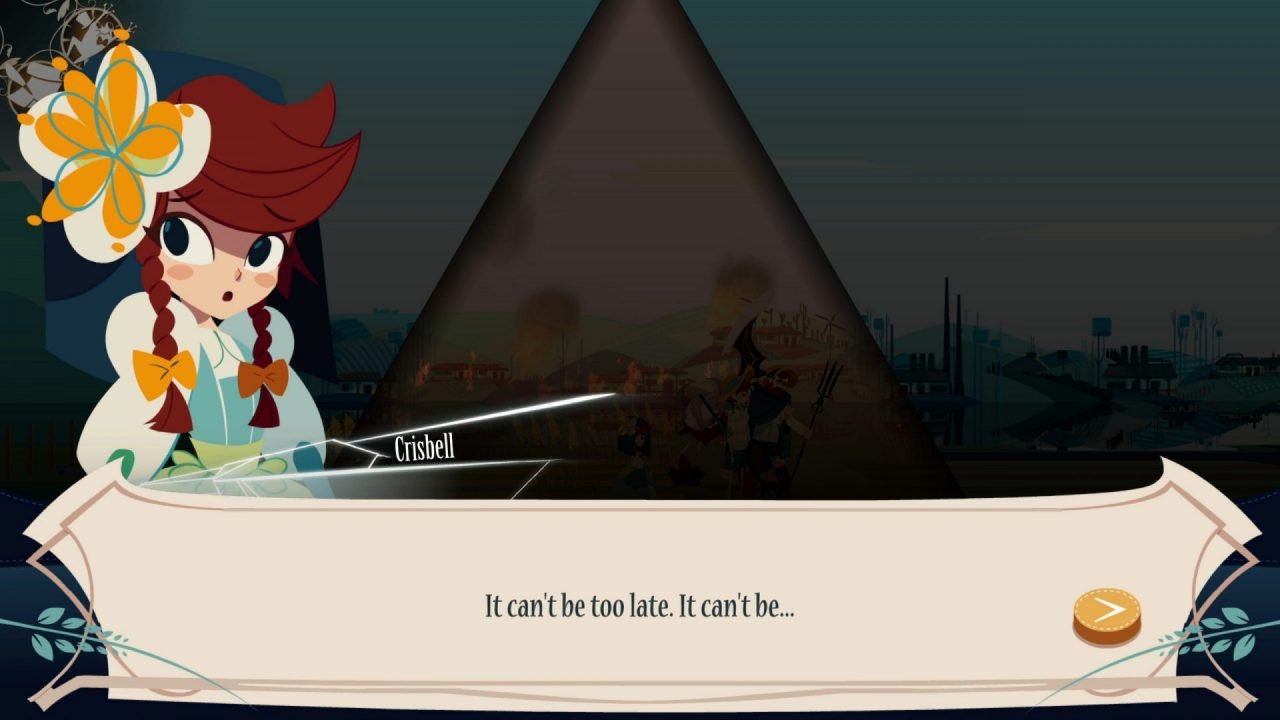 Cris Tales – ModusFor what it’s worth, Cris Tales tries to keep things interesting with the implementation of the time travel mechanic—Crisbell can split the screen, sending any enemies on the left side to the past, and enemies on the right to the future. There are some interesting strategies you can work in here—certain elemental attacks will have certain effects if you advance time, but it all gets pretty repetitive and I quickly came to dread any fight; which triggers way too frequently, and with no transitional music or sound effects. Furthermore, there’s A LOT of load time between fights—while this might be unique to the Switch, part of the reason I quickly became dejected with the combat was how much time I spent waiting for it to start and finish.

If Cris Tales has one thing going for it, it’s definitely style. The game is absolutely gorgeous, with a breathtaking art style that is so incredibly detailed and evokes the works of Cartoon Saloon. Every character, from party members, to both NPCs and enemies that have past, present, and future forms; is uniquely designed, and bursting with personality. The music is equally as good, combining sweeping orchestral scores with heavy metal for a truly eclectic soundtrack that consistently keeps the pace up. 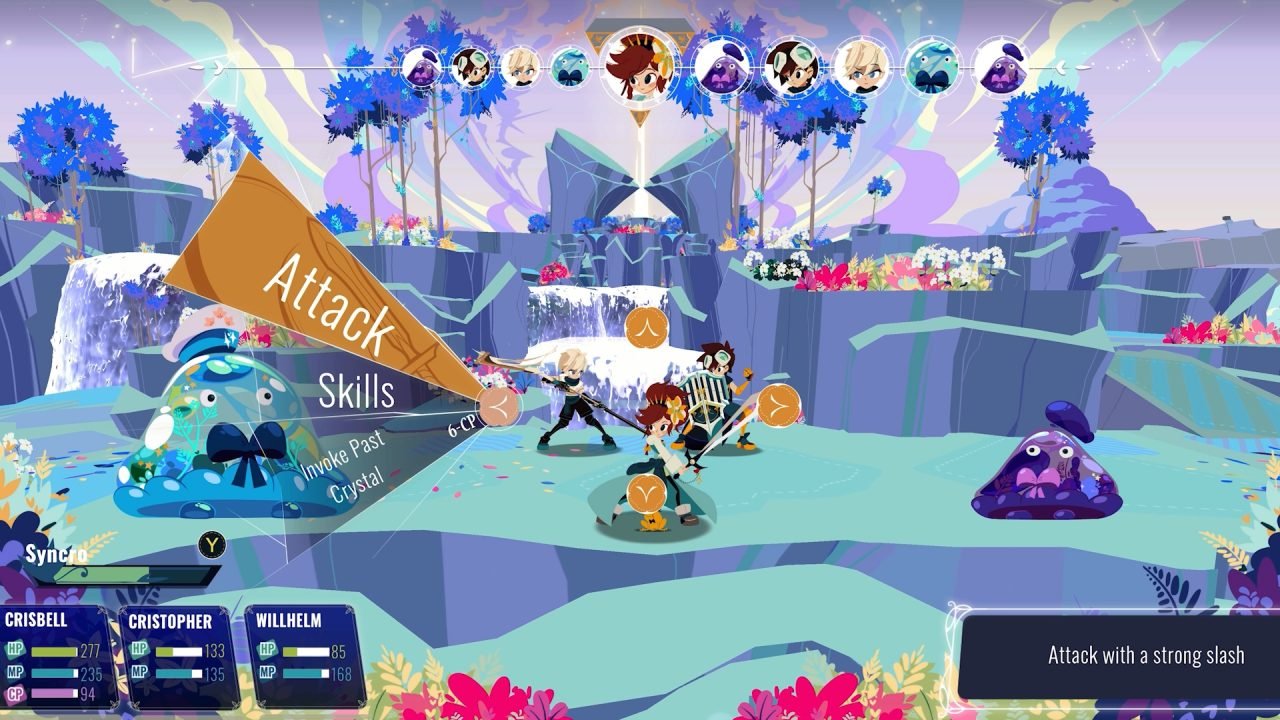 Cris Tales – ModusI really wanted to like Cris Tales, and perhaps a lot of my complaints can be chalked up to my being fairly early in the game—I know a lot of reviews are “early impressions.” However, that’s kind of the problem: I really don’t want to keep playing Cris Tales. While it has a lot of style, and some interesting mechanics, it hasn’t done anything to really hook me. It’s snail’s pace, monotonous combat, and piecemeal story hold all the good things back. Maybe it gets better later into the game, and maybe you’ll enjoy it more than I did; but I have almost no interest in getting back to it.

When is Genshin Impact coming to Switch?

Top Games Genshin Impact has yet to launch on the Nintendo Switch. / Photo courtesy of miHoYo When is Genshin Impact coming to Switch? This is a question every fan of the open-world action RPG […]

Those of you with a Nintendo Switch Online subscription will soon be able to try out a game trial for the latest Harmonix music title, Fuser. The game trial for Fuser will be available on […]

Free-to-play action role-playing game Phantasy Star Online 2: New Genesis recently launched on Xbox Series X|S, Xbox One, and PC in the U.S. and naturally the next question is if it will be coming to […]