It has been nearly four years since Doki Doki Literature Club took the Internet by storm. Originally released as a freeware game on PC, the game garnered a cult following, with fans begging for a sequel ever since. While Doki Doki Literature Club Plus is not a sequel, this new version aims to bring the core game to consoles for the first time, while adding some zest for veterans of the original.

For those unfamiliar, Doki Doki Literature Club is a visual novel that revolves around five characters. Outside of the protagonist, who is just a shell for your actions, the other four members of the literature club are where this game shines. From the well-crafted dialogue to the choices you get to make on who to spend time with, each of the four girls feel distinct and interesting to talk to.

The story of Doki Doki Literature Club follows the protagonist joining a literature club after being invited to a literature club by Sayori, his childhood friend. After each day, you are sent home to write a poem for the next meeting. This involves selecting 20 different words from a list, with each word corresponding to a different character. After your poem is finished, the character the poem best represents will get an extra scene with you the next day. For example, picking words like “vanilla” or “twirl” would get you a bonus scene with Natsuki, whereas picking words like “sing” or “calm” would get you a bonus scene with Sayori. Unfortunately, this is about the only influence you have on the game’s story, as everything else is mostly predetermined. 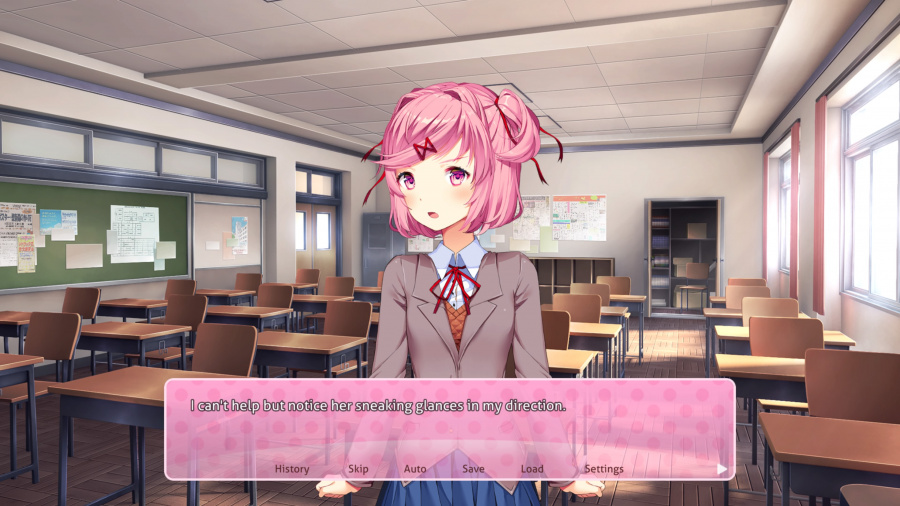 Ultimately, where Doki Doki Literature Club shines is not in the well-written characters or the poetry minigame. Instead, it shines with its not-so-well hidden horror aspects. Make no mistake, the game may look like a standard, cute visual novel, but it does an excellent job with disturbing twists and turns that help keep the experience fresh. The game is certainly not for the faint of heart, but the horror aspects are what will grip you from start to finish. In addition to the multiple content and age warnings when booting up the release, there is also a content warning checkbox that can be turned on from the menu at any time. This will bring up a notification box before any scene that might be disturbing to some, making for a great accessibility option.

Doki Doki Literature Club Plus is more than a simple port of the original, though, as the game adds a few new additions that fans will appreciate. First, it has been fully remastered, upgrading the visuals and art to HD. Character profiles and close-up shots look far better than the original, and it’s great to see so much love and attention put into the presentation. Other new additions include an image gallery, with plenty of new concept art, and a full music player, including some new songs and remixes.

The real selling point, however, comes in the form of the side stories. These six non-canon episodes take place before the original game, and focus on one-on-one interactions between each of the four main girls. While it is great to have some completely new scenes with the characters, they ultimately struggle both in terms of how short they are, and that they add very little due to their non-canon nature. Instead of getting some new lore about the world, they simply feel like short glimpses into these characters’ friendships, which ends up being disappointing. For existing fans, the new additions are small bonuses that you’ll enjoy, but the biggest problem is that all of this new content, from gallery images to the side stories, needs to be unlocked one-by-one. This means playing through the game you’ve played before multiple times already to unlock one extra bonus. Since nothing in the story really changes, you will inevitably skip all the dialogue to make one or two key decisions to get your unlockables, which ends up feeling more like a chore than being worthwhile. 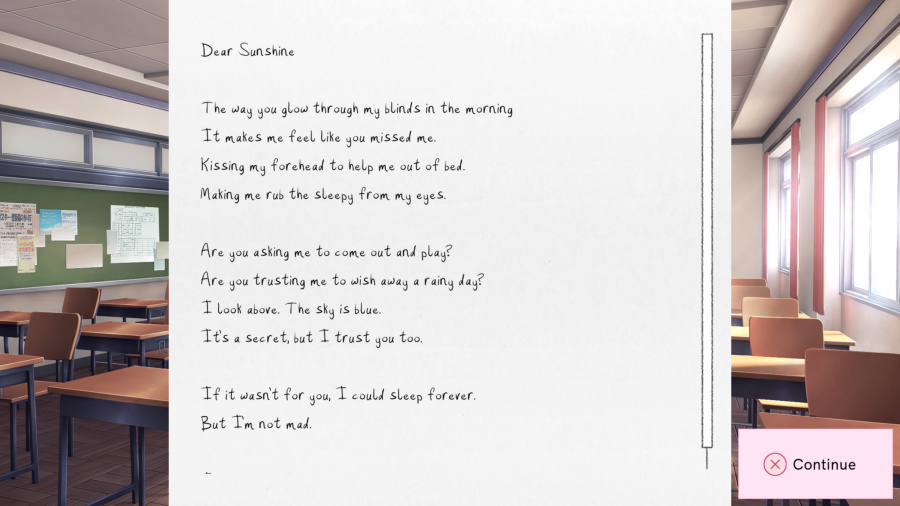 The Plus edition on consoles also suffers from problems not present in the PC release. Since the game was designed with a PC in mind, certain aspects of the gameplay, specifically near the end game, had to be adjusted to keep the experience feeling natural. Without going into spoilers, the solutions used are serviceable, but they feel like a work-around instead of a natural fit. There were also quite a few bugs at times, such as character portraits popping in too late and some minor graphical errors. Most notably, however, the skip button sometimes would stop working after holding it down too long. When playing through the game multiple times, having the skip button not work consistently was a huge inconvenience, and since the game asks you to play countless times to unlock everything, it becomes a very aggravating issue.

Doki Doki Literature Club is still a fantastic visual novel, but the Plus version on PS5 struggles to find a purpose besides being a new way to play the original. Existing fans will appreciate some of the new content, such as the side stories and concept art, but locking the content behind multiple playthroughs of a game that loses its appeal after the first time around is a tough pill to swallow. On the other hand, newcomers have no reason to play this version instead of the freeware PC release, since some core PC features were compromised for this port. Doki Doki Literature Club Plus is still a great experience that should be played by anyone remotely interested, but this specific version struggles to be a worthwhile purchase for any fan, new or old.

Innocence Coming to PS5 in 4K UHD in July

Asobo Studio has announced A Plague Tale: Innocence will be coming to PlayStation 5 in July, and one of the enhancements the game will be getting is 4K UHD. Rumors are starting to circle that […]

They didn’t have to make a press release about it, but it’s not hard to miss that Sony’s isn’t part of the E3 2021 Online Schedule. But why won’t the PlayStation creators not show […]

Eldest Souls Review (PS5) – If you’ve ever doubted the impact that Dark Souls has had on the industry, consider the fact that the word ‘Soulslike’ is now used as a descriptive term to […]