Konami has revealed its competitor to FIFA 22 this year, a free-to-play soccer game called eFootball.

It’s made by the same team behind PES (known as Winning Eleven in Japan), and will be a digital-only release on PS4, PS5, Xbox One, Xbox Series X/S and PC this Autumn. Mobile versions will follow, but it’s unclear whether a Nintendo Switch version will be made.

The company has ditched the long-standing Pro Evolution Soccer name which it’s had since 1995, as eFootball represents a dramatic overhaul of the series. eFootball will run on an entirely new engine, Unreal Engine 4, after ditching Konami’s FOX Engine which powered the past few titles in the series.

eFootball will also support cross-play shortly after December 2021, allowing players on any platform (even mobile, who will need to use a controller) to compete against each other.

Unlike PES, which operated like a traditional release, eFootball seems to be aiming for a more ‘platform’ style approach, which means it will receive regular updates, and more crucially, free, yearly updates for new seasons.

One of the biggest complaints aimed at the likes of FIFA is that each annual update fails to add enough new content and meaningful updates to warrant a full price release every year. eFootball, it seems, will finally address this complaint, and the fact it’s free-to-play means it should attract more players than before, as even those who are merely curious can give it a go.

Of course, the flip side to eFootball’s platform style approach is that content will be more limited than the likes of FIFA 22. It will launch with exhibition matches, with a selection of nine clubs to play with (check out the roadmap below of a full update). Other modes will become available down the line which players can purchase separately, which should let you tailor the game to your liking. 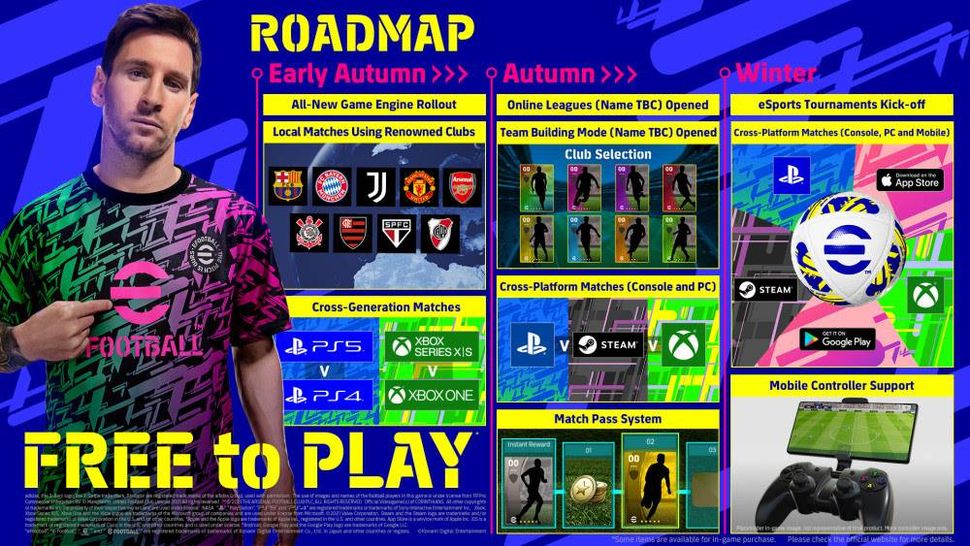 (Image credit: Konami)eFootball promises to bring the beautiful game to life like never before, too, thanks to its new Motion Matching animation system. Much like FIFA 22’s HyperMotion technology, Konami says eFootball will feature four times as many animations as previous PES titles, and will be present in every version of the game. This is a far cry from FIFA 22, where the benefits of HyperMotion are only available on the PS5, Xbox Series X/S and Stadia versions of the game.

There’s no doubt that since the leap to Xbox 360 and PS3, Konami’s PES series has struggled to keep pace with FIFA. PES, or Pro Evolution Soccer as it was called back then, was the football fan’s game of choice on PS2 and Xbox, and it’s been hard to watch Konami continue to be eclipsed by FIFA’s big annual releases and innovations like FIFA Ultimate Team.

The move to a free-to-play model certainly makes sense for eFootball, then, as there’s still some debate to be had that – despite a lack of licenses and overall presentation value – PES still plays a better game of football on the pitch than FIFA. However, the fake team names, lackluster modes and annual price tag has always represented too much of a barrier to entry for some to give PES a go.

Cross-platform play is also a great addition to eFootball, something which we really wish EA would implement in FIFA 22. Being able to play against your friends, no matter which platform they play on, is a huge win, and one of the most frustrating aspects of FIFA.

There’s potential, then, for this new approach for PES to pay off. However, like any evolving platform, Konami will have to carefully consider how it rewards players, ensuring that content updates are consistent and meaningful, and avoiding any pitfalls that can accompany free-to-play titles such as “pay to win” content. From a logical standpoint, eFootball makes sense for Konami, and could provide some actual competition to FIFA for the first time in years.

The PlayStation 5 and PlayStation 4 Trophy lists for Scarlet Nexus have appeared on Sony’s servers, giving us some insight into the scope of Bandai Namco’s upcoming action RPG. As always, we’d advise against looking […]