LEGO Builder’s Journey launched on Apple Arcade in 2019, but now this narrative-driven puzzle game is finally coming out on PC and Nintendo Switch. Having tested out the stunning-looking PC version, we’re very pleased to report that it’s well worth playing, whether you’re usually into LEGO games or not.

When you think of LEGO video games, the first thing you might picture is a charmingly silly licensed co-op title like LEGO Star Wars: The Skywalker Saga. There have been so many games like this over the years, tying into pretty much every big pop-culture franchise that you could think of, from Lord of the Rings to Jurassic Park.

And because of all those LEGO games that exist in the rear-view mirror of our collective consciousness, it’s hard to imagine that a LEGO game could exist that does something totally different and flips the script completely. However, that’s exactly what LEGO Builder’s Journey does – it throws away the traditional recipe for a LEGO game and serves up something utterly fresh instead.

LEGO Builder’s Journey is the first game brought to us by Light Brick Studio, an internal developer within the LEGO Group, and it’s a powerful calling card for the company. We like it so much that it’s our RadioTimes.com Game of the Week, and you can keep on reading to find out why! 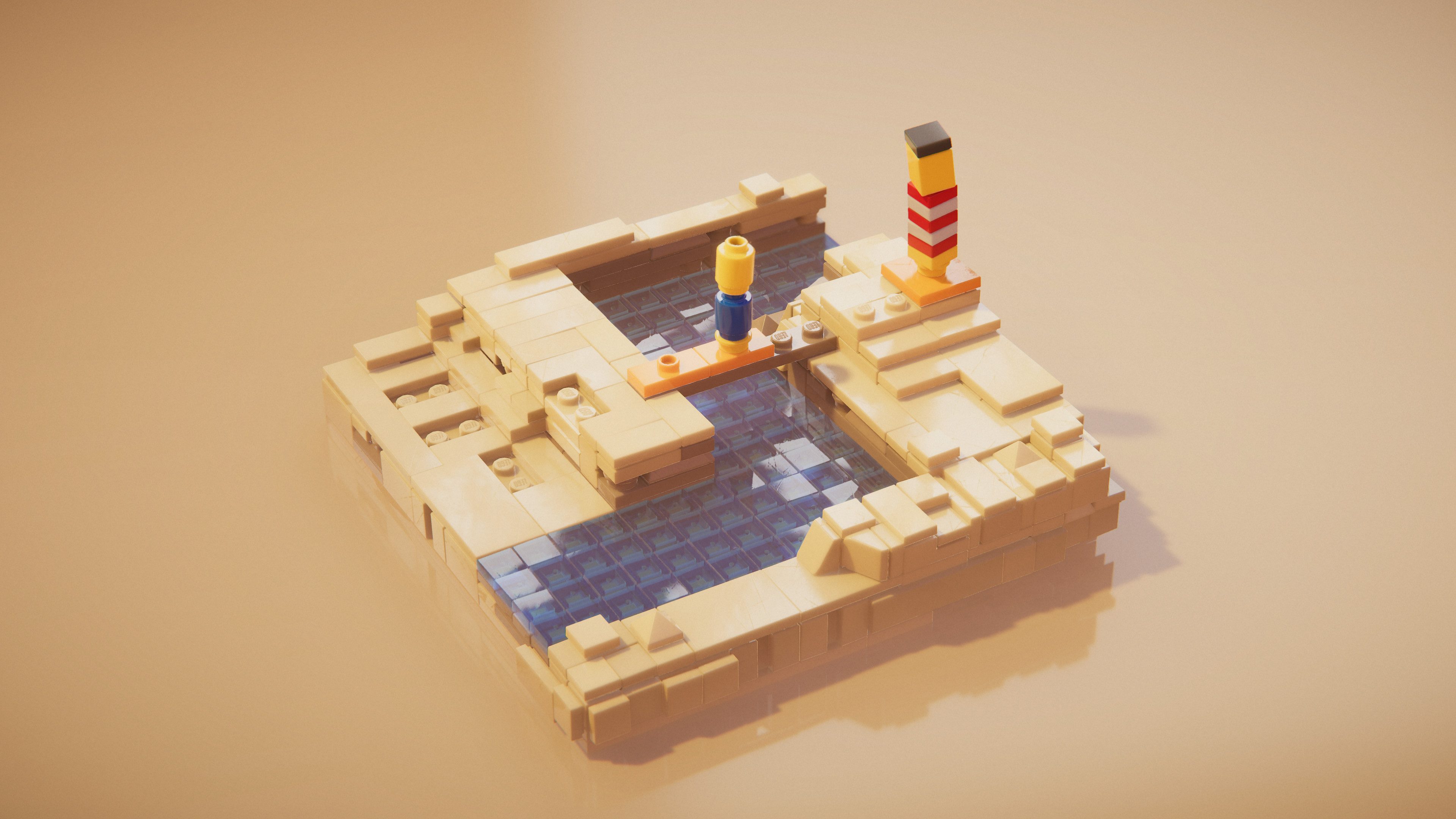 When we booted up LEGO Builder’s Journey on our PC, powered by NVIDIA’s RTX 3070Ti GPU, the first thing we noticed was the utterly gorgeous graphics. Rather than looking cartoonish, the bricks here look like they really could be from your real-life collection. With ray-tracing and DLSS enabled, the light cascades off the bricks with an astounding level of realism.

The graphics are so good that you can almost totally suspend your disbelief. You might momentarily forget that you’re looking at computer-generated images rather than photographs of real bricks from the box in your loft.

The only thing that pulls you back from full immersion is the fact that the game takes place in an abstract world, where the horizon stretches on indefinitely and brick-built characters have personalities and lives.

You can witness these gorgeous visuals on pretty much any PC, or even a Mac, because the game is available on NVIDIA GeForce Now – a streaming service that can stream high-end gaming experiences onto a wide range of screens. And once you’ve wrapped your head around how good the game looks, you should prepare yourself for some more surprises.

How to play LEGO Builder’s Journey: 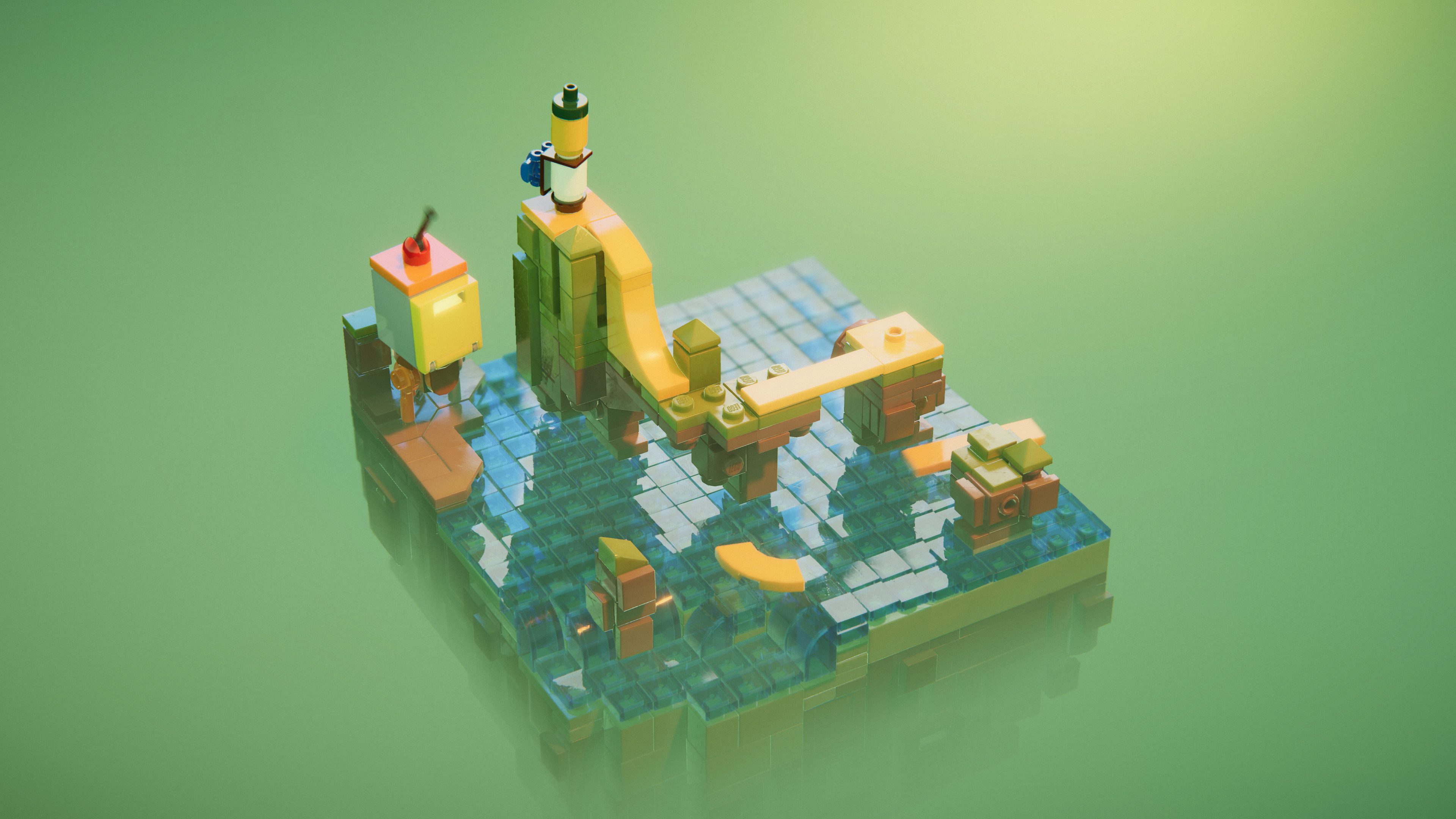 The puzzles in LEGO Builder’s Journey start off simple

The gameplay starts off simple, with the player tapping and dragging with their mouse (or their finger, if you’re playing on a touch-screen device) to click bricks into place. This is a puzzle game rather a than a building game, though, so you’re placing bricks with a view to solving a situation rather than creating a house or anything like that.

Once you’ve picked up the basics of rotating, moving and placing bricks – which comes complete with that very satisfying ‘snaps into place’ sound that you’ll recognise from real life LEGO playtimes – the nature of these puzzles will begin to become clear.

Often, you’re placing bricks, tiles and other LEGO pieces to try and create a pathway between two characters. To start with, you’re doing this so that a child (who, just to be clear, is made of bricks) can walk across the screen to be reunited with a parent (also made of bricks).

Early on, you’ll begin to realise that there’s actually a story developing here. Rather than just solving puzzles for the sake of it, you’re guiding a little family through a series of adventures, and the game gradually makes you care for these brick-based beings and their journey together.

As you progress, the puzzles get more complicated and the story also develops some interesting wrinkles. The parent and child get separated, with the story branching off in two directions and either side of the narrative getting its own unique challenges.

Rather than just making paths, you’re now having to build bridges, interact with moving elements, press button and react to various stimuli. Things begin to get quite difficult, allowing you feel highly satisfied when you finally crack a tricky puzzle.

We did come across a couple of glitchy segments where we had to reload levels and start again, but none of these were game-breaking bugs that ruined the experience. And there were a few bits that were more difficult than we would’ve liked, which left us wishing there was a clue or hint system (sadly, there isn’t), but that’s just personal preference.

One thing that most people will be able to agree on is that LEGO Builder’s Journey is quite expensive for such a short game – it will cost you £15.99 on Steam, or £17.99 on Switch, but you should be able to complete your first playthrough in under two hours. That being said, however, let’s not forget how expensive cinema tickets are! A trip to the movies is normally a couple of hours of entertainment, too. And at least with this game you can play it again and again if you like.

Play our previous Game of the Week picks:

Those very minor gripes aside, we really loved the time we spent with LEGO Builder’s Journey and we’d wager that most players would also find quite a lot of enjoyment here. The graphics are great, the story is surprisingly touching, and there are some really fun moments of puzzle design and problem-solving.

There’s also a beautiful musical score to the game, created by Henrik Lindstrand, which really helps to elevate the experience and hammer home the emotional beats. It starts off seeming like a relatively simple piece of twinkly piano, but it swells up later with other instruments coming in and providing some powerful moments.

The visuals, the puzzle design, the narrative and the music combine to build something special, which will make you rethink what a LEGO game can be. Certainly, we’re very excited to see what Light Brick Studio does next.

And so, if you’ve got a couple of hours to spare and fancy trying something totally different to any LEGO game you’ve experienced before, we’d heartily recommend that you give this one a go!

Final Fantasy XIII looks impressive on PC thanks to mods

Square Enix was not at its best in the Xbox 360 and PS3 generation. Like other Japanese companies, they had a hard time adapting to high definition. In this context, Final Fantasy XIII was born, […]

Minecraft’s Survival Mode is boring, and it needs to evolve

Source: Mojang Studios Mojang Studios’ Minecraft is an unstoppable juggernaut of a title, with the game notably crossing 131 million monthly active users in the last year. Minecraft also happens to be the best-selling […]

Source: https://ff.garena.com/media/wallpaper/en/ As of today, Free Fire (Garena Studio) certainly requires no introduction; it’s only one of the most popular mobile Battle Royale games in existence, surpassing the likes of PUBG Mobile, Call of Duty: […]