What is it? An action RPG featuring psionic powers and a whole lot of dating sim trappings.

Scarlet Nexus is a little too big for its britches. Bandai Namco’s latest original game aims high—this is an action RPG hybrid festooned with Devil May Cry-like swordplay and Monster Hunter weak spot targeting, bottled up in an epic narrative that seems to explore a new high-concept sci-fi theme with every chapter. (There’s time travel, neural implants, totalitarian governments, the basic question of consciousness.) In the margins you’ll find a Persona-ish relationship system, an interlocking network of psionic powers, and a boatload of frilly, cosmetic customization options. It’s a wonder how close it comes to pulling all of that off at once.

You take control of either Yuito Sumeragi or Kasane Randall, two young members of a paramilitary fighting force called the OSF. They’re tasked with exterminating these horrific, eldritch beings known only as “The Others” who are laying siege to our futuristic, mysterious, and slightly uncanny society. Both characters have their own full campaigns that crisscross at certain junkets, giving players a lot to chew through once they finish their initial trip through the plot. (Like many other games that have used this trick, such as Nier:Automata and, um, Sonic Adventure 2, there are plenty of lore-bombs hiding out in each of those crusades independently.) Regardless of what perspective you choose, you’ll start out by following orders and clearing out teeming pods of Others on the outskirts of human civilization, before the story takes a darker, increasingly cryptic turn. Who exactly are these creatures we’re killing? What’s in those shipments that keep leaving the metropolis? 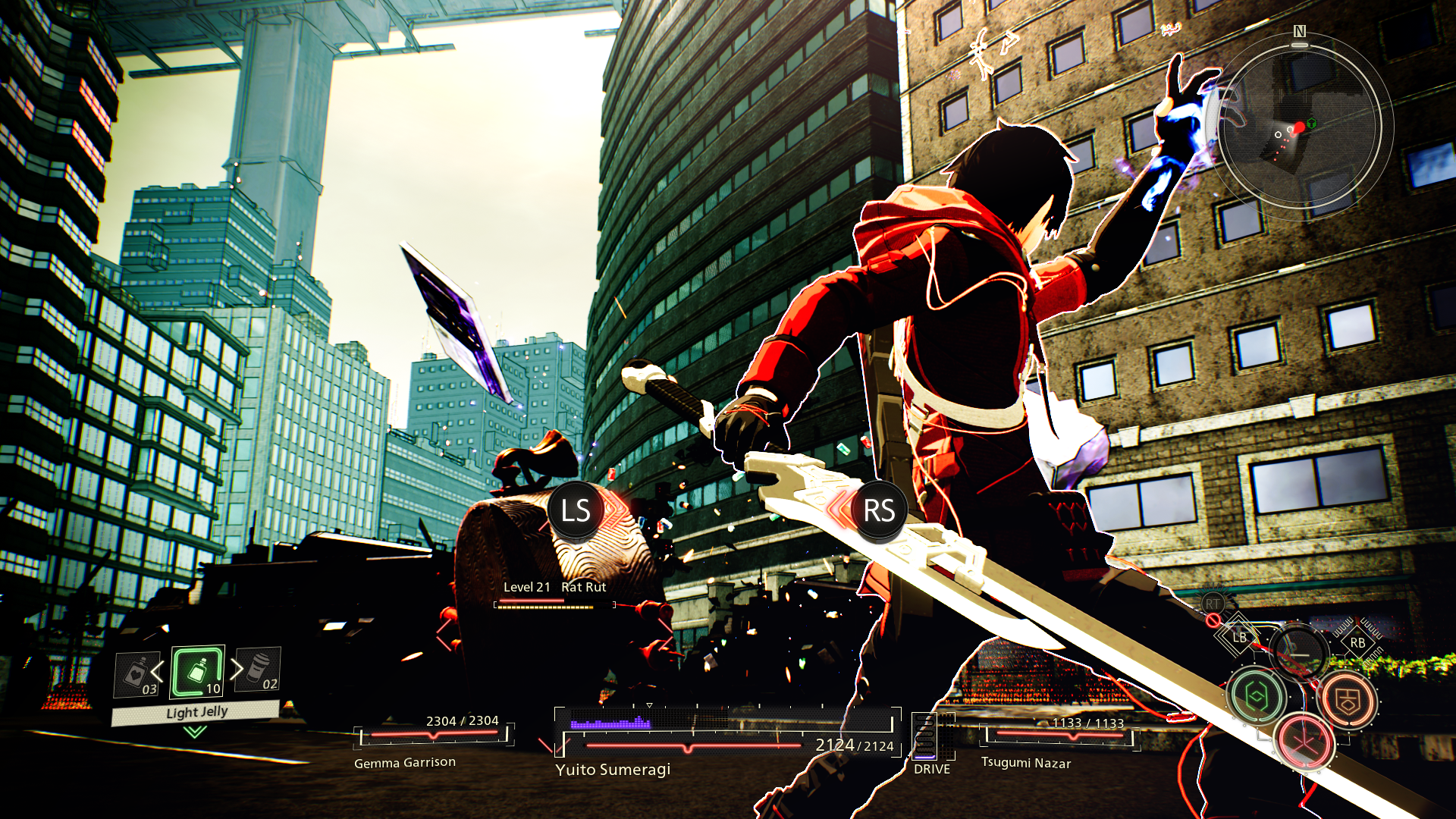 (Image credit: Bandai Namco)You will complete this investigation on a level-by-level basis. Yes, Yuito and Kasane can traipse around the map to loot overlooked corridors and uncover a few sidequests, but for the most part, your time in Scarlet Nexus will be spent zoning into an area, killing a ton of bad guys, and enjoying the grave cutscenes that split up the setpieces. This isn’t a problem, because Namco has generated an excellent combat system here. Both protagonists are psychokinetic, and by holding the right trigger you’ll send whatever piece of debris is nearby hurling towards an enemy’s face. Mix that in with your melee strikes, and you have an elementally satisfying mixture of acrobatics and violence that rivals Ninja Gaiden, God of War, or any other mid-2000s button-mash classic. Scarlet Nexus never approaches the level of technique displayed by true Bayonetta lifers—there are hardly any combos to memorize or weapons to master—but it was flashy enough to sustain me till the final chapters.

Along the way, Yuiko and Kasane have access to their small travelling band of other psionic teens. Those accomplices aren’t controlled directly, and honestly I found them to do pretty negligible damage overall, but they do play a vital role. The party has a diverse suite of supernatural expertise. Some are sclerokinetic, which grants invulnerability, or electrokinetic, or clairvoyant, and the player can tap into those skills at any time—which is kinda like popping a cooldown in an MMO. All of these effects can have a drastic impact on the combat; an Other in the distance shields its weak spot whenever I draw close, so I borrow my friend’s teleportation ability to blink up into striking distance without the beast noticing. I fling a drum full of oil onto a vagrant in the corner, and tap into an ally’s pyrokinesis to set them on fire and score some lingering bonus damage. (Yes, there’s a whole interlocking chain of status effects in Scarlet Nexus, yet another bit of circuity that the game flirts with.) 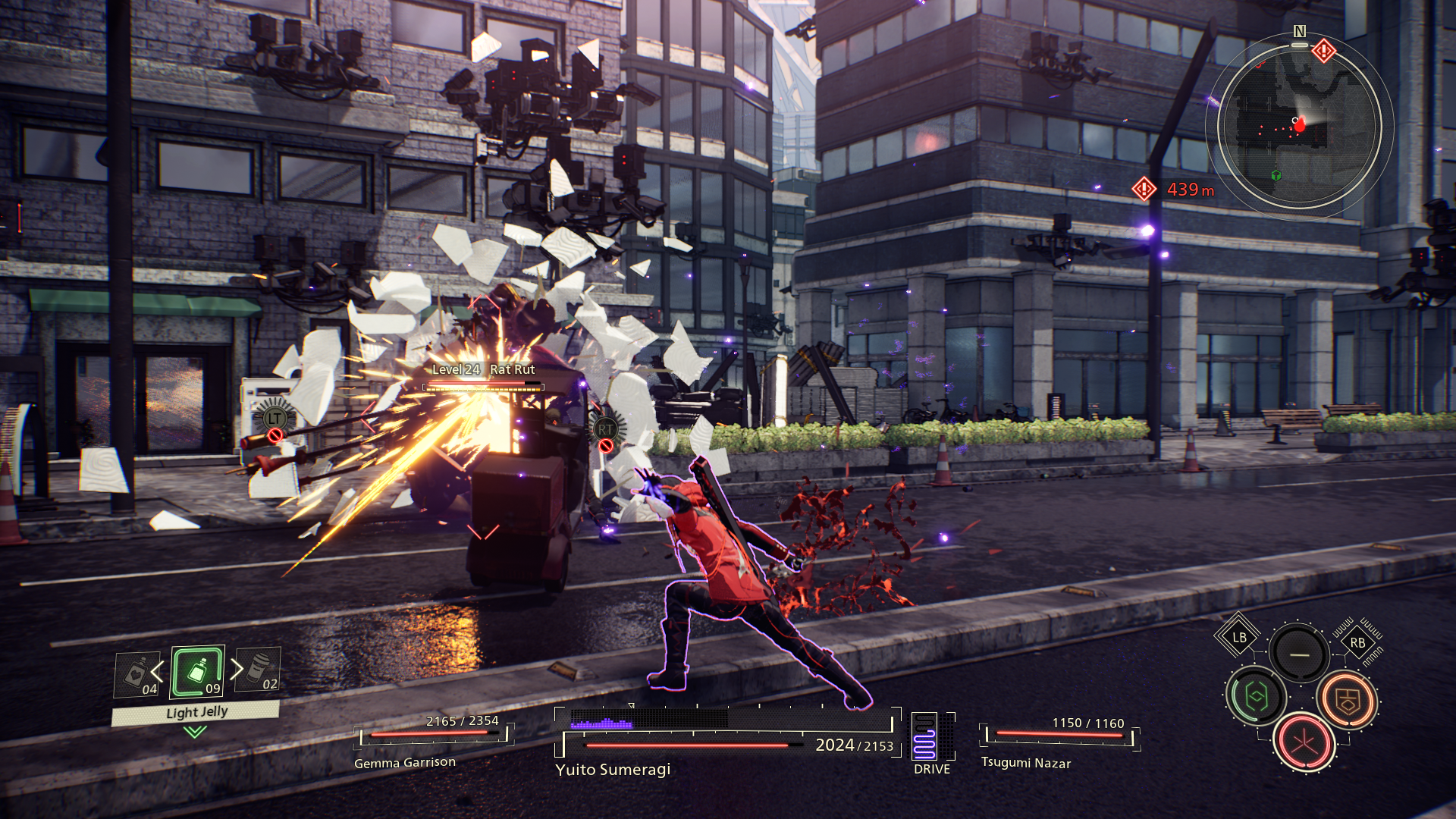 (Image credit: Bandai Namco)By the end game I was firing off several psi blasts at once, before overloading Yuiko’s own brain in order to shell my opponents with massive chunks of dark shrapnel. One of my favorite ideas that Scarlet Nexus eventually weaves in is a “brain crush” bar that appears below the health meters of The Others. It works similar to Sekiro’s posture system; wear down the enemy with a combination of psychic and physical strikes, and the protagonist can unleash a devastating coup d’etat that renders their remaining HP completely obsolete. Those animations are brutal and pure anime, the sort of stuff that could be edited together in a single blood-soaked YouTube video like Mortal Kombat fatalities. An action game ought to let the player feel like a god once they’ve traversed down the talent trees, and Bandai Namco passes that test with flying colors.

In the interim moments, where you’re not decapitating Others and experimenting with all your spooky, death-dealing powers, Yuiko and Kasane spend a lot of time consoling the damaged souls in their platoon. Scarlet Nexus doesn’t move in quasi-real time like Persona, but the game does pause at certain junctures in the narrative for a brief cooldown period. There, you can give gifts to your crewmates and embark on brief “bond episodes”https://www.pcgamer.com/” where you learn a little bit more about them. Those episodes usually reward the player with a boost in their relationship with that NPC, which allows them to be a little more savvy in your party. (At one friendship tier, I could summon a chummy teammate into an encounter for a brief onslaught, almost like tagging in a Marvel vs Capcom character.) These subplots are generally pretty good, and they help fill out the extremely dense fiction that Scarlet Nexus wants to establish. In particular, I was taken by Tsugumi, a young clairvoyant who confided some deep trauma with me on one of the first times we hung out. After all, if you’ve been able to see the future since you were a baby, there’s no telling what horrors you might accidentally witness. 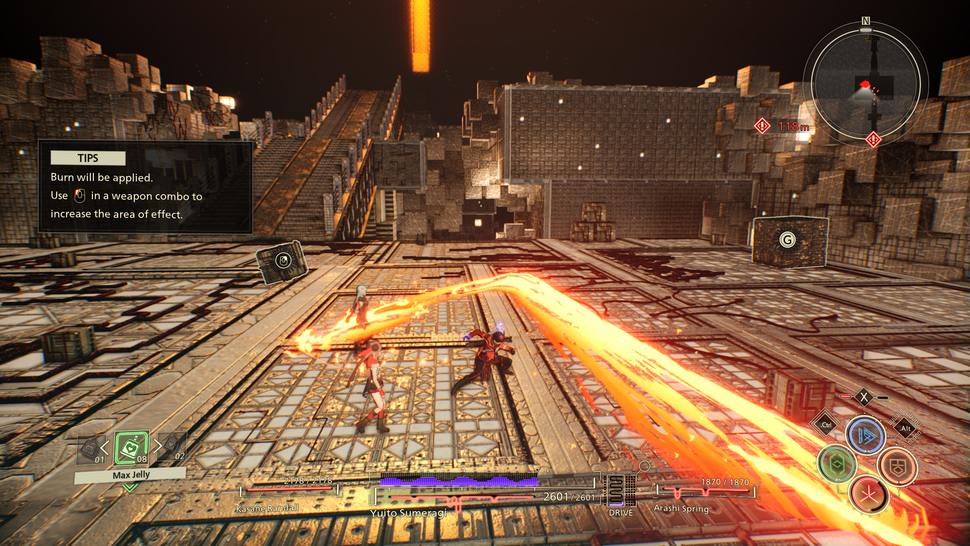 (Image credit: Bandai Namco)Generally though, I wish Scarlet Nexus diversified some of those outings a little better. You’re almost always hanging out with your comrades at the exact same restaurant, and the plot beats are uniformly focused on a slow interrogation of the manifold injustices that comes with being a high school-aged supersoldier. What makes Persona great is how weird and apocryphal those journeys can be. One day you might be tending to a drunk journalist in the bar, the next you’re campaigning for a Bernie Sanders stand-in outside of Shibuya Crossing. Scarlet Nexus, on the other hand, uses most of these engagements to lay on an extra veneer of exposition that the developers couldn’t fit in the primary storyline, which is certainly valuable, but I didn’t feel like I got to know my battalion as well as I would’ve liked.

Honestly, that same issue pervades through the rest of Scarlet Nexus’ trimmings. This is a very big game that’s been forced into a small box. The setting is indelible: An uneasy, Shadowrun-ish realm, defended by a military who are augmented with cybernetic tech that lets them leverage their brains as ammunition, holding the line against these grotesque, Escherian demons who are desperate to purge humanity from the streets. If Scarlet Nexus only wanted to tell that story, it would probably be much more successful. Instead, we quickly deviate to body horror, to government censorship, to the enigma of pink matter, to standard-issue, Looper-style time travel paradoxes. By the time the fifth or sixth monkey wrench was thrown into Namco’s story, and it became clear that they weren’t going to follow any one of those fascinating hooks to a gratifying conclusion, I started to check out. Honestly, it feels like every 30 minutes of gameplay is broken up by a lengthy lecture peeling back yet another layer of what’s really going on here. But those reveals never hit me emotionally, perhaps because I knew that in the next chapter, a brand new monologue would overwrite everything I just heard. 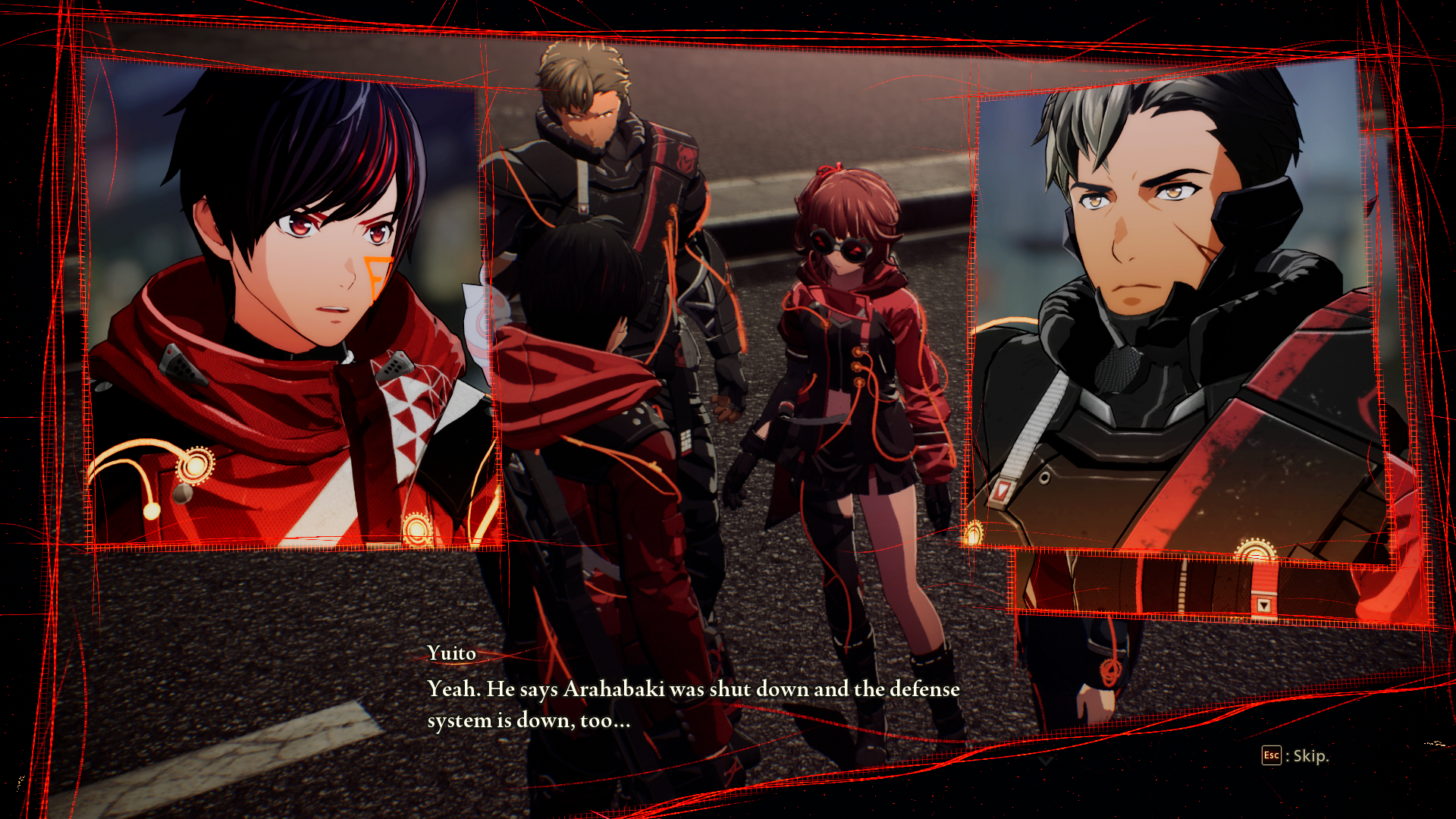 (Image credit: Bandai Namco)The same goes for Scarlet Nexus’ overworld, which is beautifully rendered in fineline anime cartooning, and is equipped with a sublime J-Pop jingle. (The music, across the board, is fantastic.) Unfortunately, the downtown hub is a couple of blocks, and the game has a frustrating desire to reuse old level layouts for new missions. A cardinal sin! The sidequests are also laughable; you basically talk to a random bystander on the street and they ask you to go kill an Other archetype in a specific way. Your reward is rarely anything more than a health potion. Scarlet Nexus creative team were clearly out to establish a bold new franchise, but the scale they were working with let them down.

But frankly, that gives me hope for the future. If Scarlet Nexus earns a sequel—if the next time I traipse down a Comic-Con hall I see dozens of teens dressed for cybernetic warfare—then I think the team at Namco will really iron out the kinks in the second go around. A larger, more interactive universe, some juicer off-the-main-path content, maybe a few new environments for our languid, afternoon friendship outings. It’s all so easy to imagine. For now, Scarlet Nexus is a great promise and a good game.

In our original review of Wreckfest for Xbox One we praised its variety in races, realistic handling and incredible destruction system. It’s clear Wreckfest was the destruction derby game fans had been waiting for. It […]

Broad reports from players across social media are outlining a hacking attack on Apex Legends servers that leaves the game unplayable, instead replacing server playlists with a message about Titanfall, Respawn’s previous game series. “SAVETITANFALL.COM, […]