The PlayStation 4 will be incredibly important to Sony over the next few years, and the current-gen console is expected to prop up the PlayStation brand through the transition to PS5.

Sony expects big things from the PlayStation 5. The console is expected to beat the PS4’s lifetime sales and Sony is preparing the largest-ever shipment of consoles for next fiscal year. However, the PS4’s mighty 116.4 million install base will continue being a tentpole for PlayStation earnings from now through 2023.

In a recent investor’s meeting, Sony Interactive President Jim Ryan details just how important the PS4 is to Sony’s continued success. Sony expects the PS4 to have the largest tail of any PlayStation console, and the PS4 will deliver a whopping 70% of PS Store spending in FY2022. This is the same year Sony will release a record-breaking 14.8 million+ PS5s onto the market.

Even as the PlayStation 5 is about to turn a profit, Sony says the PS4 will still remain the top earner through 2023.

“We anticipate the PS4 will have the longest tail and deepest engagement of any our platforms. There are a number of reasons why we believe this will be the case,” Ryan said.

“First, we anticipate that we will be able to retain many of the engagement gains that were made in 2020 during COVID and work-from-home.

“Secondly, the line up of new software for PS4 for FY21 and FY22 is extremely robust. Publishers understand the opportunity the large and very engaged community offers, and will exploit it.

“Third, the explosive growth of the free-to-play category is perfectly-timed for the late life cycle gamer.

“And finally, our PlayStation Plus subscription service provides us with an extremely efficient means in communicating with our large community.

“Great new PS4 releases and an expansive catalog mean that we expect the PS4 to account for 70% of next year’s store spend despite the growing install base of the PS5.”

Sony previously said it plans to support the PlayStation 4 until at least 2023 and it’s possible cross-gen releases could come after that too. 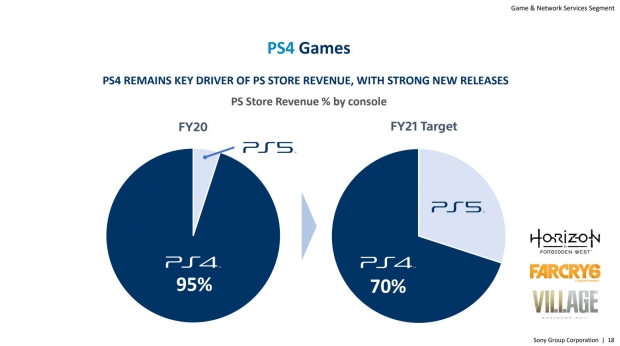 So far no big publisher is ready to make next-gen console exclusives and abandon the PS4’s mighty install base.

Activision released on last-gen with CoD in 2020, and will likely do the same for 2021. EA is releasing all of its games on PS4 including Battlefield 6, and so is Ubisoft and Take-Two Interactive. Next-gen versions are indeed coming, but games won’t be exclusive outside of first-party titles. 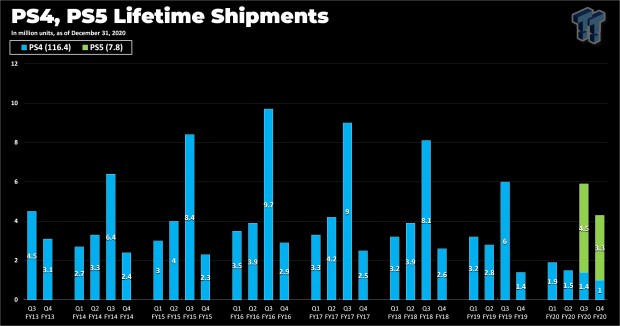