Video games aren’t usually known for their humour, but this new indie game may be the funniest since Portal 2.

We’ve said this before, but we really don’t know what the benefit is supposed to be, of releasing indie games the day they’re announced. Nintendo has been doing it a lot lately, as part of their Indie World livestreams, and all it does is make it that much less likely that anyone will have a chance to get a review done (as we type this there are currently none on Metacritic for the Switch version). There Is No Game: Wrong Dimension doesn’t deserve to be ignored though, as it’s one of the best games of the year.

There Is No Game: Wrong Dimension was first released on PC in the summer of last year, with mobile versions shortly after, although it never seemed to gain much attention. If you saw the game on Indie World you might remember a flash of retro looking images, that seemed to be parodies of famous titles like Zelda: A Link To The Past and Day Of The Tentacle. There was no real hint as to what the game is though, with many probably assuming it’s some kind of mini-game collection.

The allusion to Day Of The Tentacle isn’t as random as it sounds though, as this is primarily a point ‘n’ click adventure game. Although as far as the game itself is concerned its title is literal and there is no game, with everything from the narrator to the menu screen trying to convince you that that there is nothing to see here. But there most definitely is.

The other obvious reason for why there are so few reviews of There Is No Game is that it’s almost impossible to describe without spoiling everything. So the absolute best advice we can give you is to trust us that the game is great, pay your £11.69, and enjoy one of the best indie games of this or any other year. If you want to know more though we’ll try and get across the basics without spoiling any of the best bits.

The first thing to realise is that There Is No Game is very self-aware, both of its own existence as a game (despite the constant denials) and of the tribulations of the wider video game industry. There is an existential threat, that we’re not going to spoil, but the beginning of the game is reminiscent of both The Stanley Parable, in terms of the interactive narration, and Pony Island – especially when you have to rifle through the game files and forcibly place icons on the screen in order to make the game work.

This eventually leads you to playing a homage to SNES era Legend Of Zelda and a point ‘n’ click adventure starring Sherlock Holmes and Watson. In both cases though most of the gameplay still revolves around breaking the game and forcing it to do what you want, such as tricking the Link stand-in into jumping or fiddling with the credits of a Portal song parody.

The fourth wall is not just regularly broken, but redecorating it is a central thrust of the gameplay. The references to other games can feel a touch obnoxious at times, as the game takes a little too much pleasure in its geek references, but it’s no more self-indulgent than a movie like The Player, which is a film about making films, and it’s generally a lot funnier. 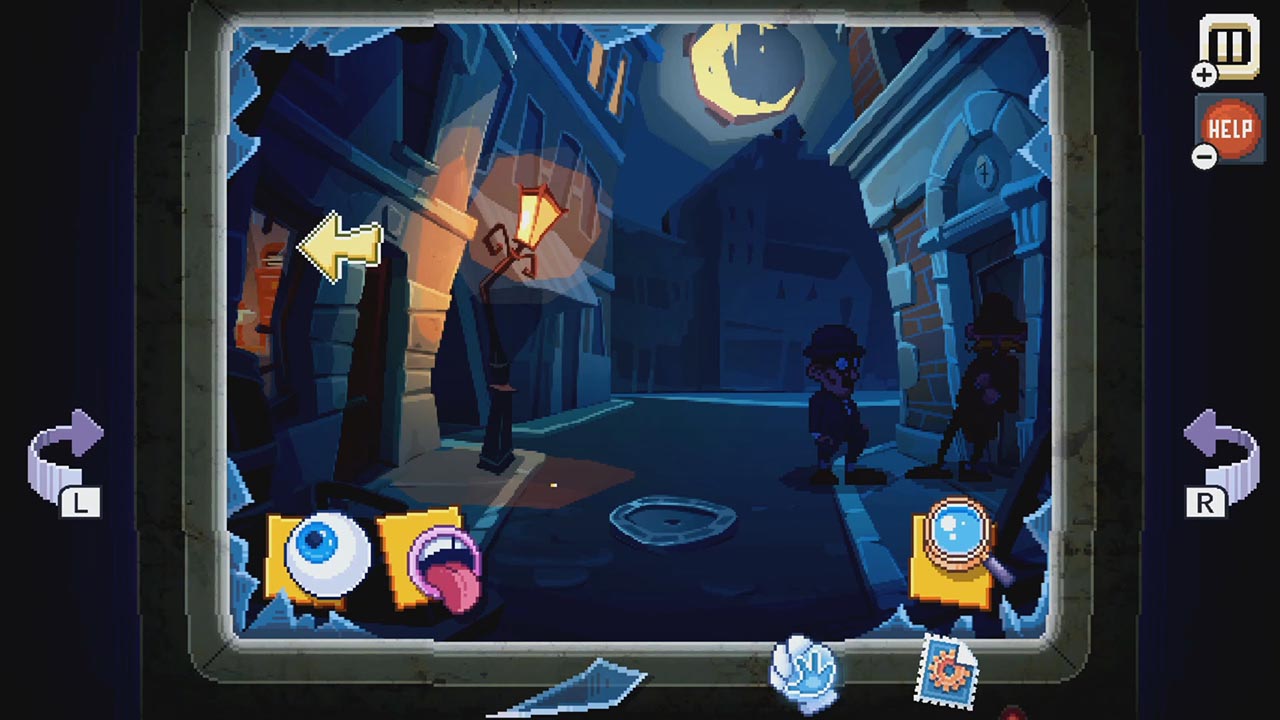 The most obvious reason why there are no big budget graphic adventures any more is that publishers do not want people having their progress in a game stop dead because they can’t work out a logic puzzle. Even mid-budget games like The Walking Dead and Life Is Strange strip out anything resembling a real puzzle and concentrate purely on the script. There are indie games that try to keep the flag flying but creating obstacles that are both challenging and logical is no easy thing.

Despite the extra abstraction of its premise though There Is No Game gets it absolutely right. There are tiered hints if you do get stuck but show a little imagination and you probably won’t, as once you realise the scope of the game, in terms of how you can interfere with its interface, it all begins to seem satisfyingly logical… and enjoyably absurd.

At times There Is No Games does seem a little too eager to show off how much the developers know about games (and how much they hate free-to-play titles) but given the embarrassingly low quality of most video game parodies this is an extraordinarily fun, and funny, experience.

It’s also a really good point ‘n’ click adventure and proves that the genre can still work as more than just nostalgia. The title There Is No Game is knowingly coy, as not only is there a game here but it’s one of the most enjoyable and inventive indie titles of recent years.

There Is No Game: Wrong Dimension Nintendo Switch review summary

In Short: A hilarious parody of point ‘n’ click adventures and video games in general, whose jokes are as inspired and imaginative as its puzzles.

Pros: Enjoyable premise that’s both funny and clever, in terms of both its script and its fourth wall destroying puzzles. Great presentation and retro graphics.

Cons: The references to other games can get a little obnoxious and self-satisfied at times. Not very long.