Moonglow Bay, the gorgeous voxel fishing RPG, featured in our Xbox Indie Showcase recap, where we thought it might offer the same blend of relaxing charm and emotional depth as something like Spiritfarer. Either way, it definitely shot straight onto our radar, and we thought it might be a good time to reach out to developer Bunnyhug’s co-founders — creative director Zach Soares and art director Lu Nascimento — to discuss everything to do with Moonglow Bay.

What is Moonglow Bay?

Moonglow Bay comes from developer Bunnyhug, and is described as a “relaxing, slice-of-life fishing RPG” in which you’ll be exploring, investigating, making friends, and of course, fishing.

When does Moonglow Bay launch?

We don’t yet have a specific release date, but Moonglow Bay is expected to launch in 2021.

Will Moonglow Bay be on Xbox Game Pass?

Yep! Moonglow Bay will join Xbox Game Pass on day one. “It was a slow and long dynamic,” says Soares, speaking of the partnership with Microsoft to bring Moonglow Bay to Xbox Game Pass. “We had shown the game privately at GDC 2018 while it was in super early development… Microsoft was super into the idea but obviously we were in no position to make any arrangements yet. From then on, at every step in development, Microsoft always checked in with us, curious about how the game was coming along,” Soares continues. “Game Pass had picked up a lot of steam by the time the game was in a comfortable position and from what I remember it organically grew in conversation. Coatsink and Robot Teddy kept up the exchange and now we’re here, tada!”

The official description has it that you’re a “rookie angler, working together with friends, family, and neighbours to hone your fishing skills, nourish relationships, and restore a remote town’s fractured community,” and that you’ll “embark on a deep and touching story as you seek to fulfil your partner’s final wish in a town on the verge of bankruptcy.” From all we’ve seen so far, Moonglow Bay looks like a wholesome, uplifting RPG, and it struck us as curious that it starts with such a sad event: the death of your character’s partner. “Death was something we wanted to touch on from the beginning,” says Soares. “It’s a heavy subject matter but we wanted to take it in a route that presents it as ‘it’s not the end.’ It occurring so soon in game means we not only give the game, but the player the time they need to mourn and deal with the outcome of such an event.” It sounds as though our character won’t be alone in learning to live with grief, as Soares adds, “we introduce more characters that lived similar situations and connect with the main character to develop strong friendships. It’s a way to start the game in the middle of a story rather than try to set up this strong climax midway.” 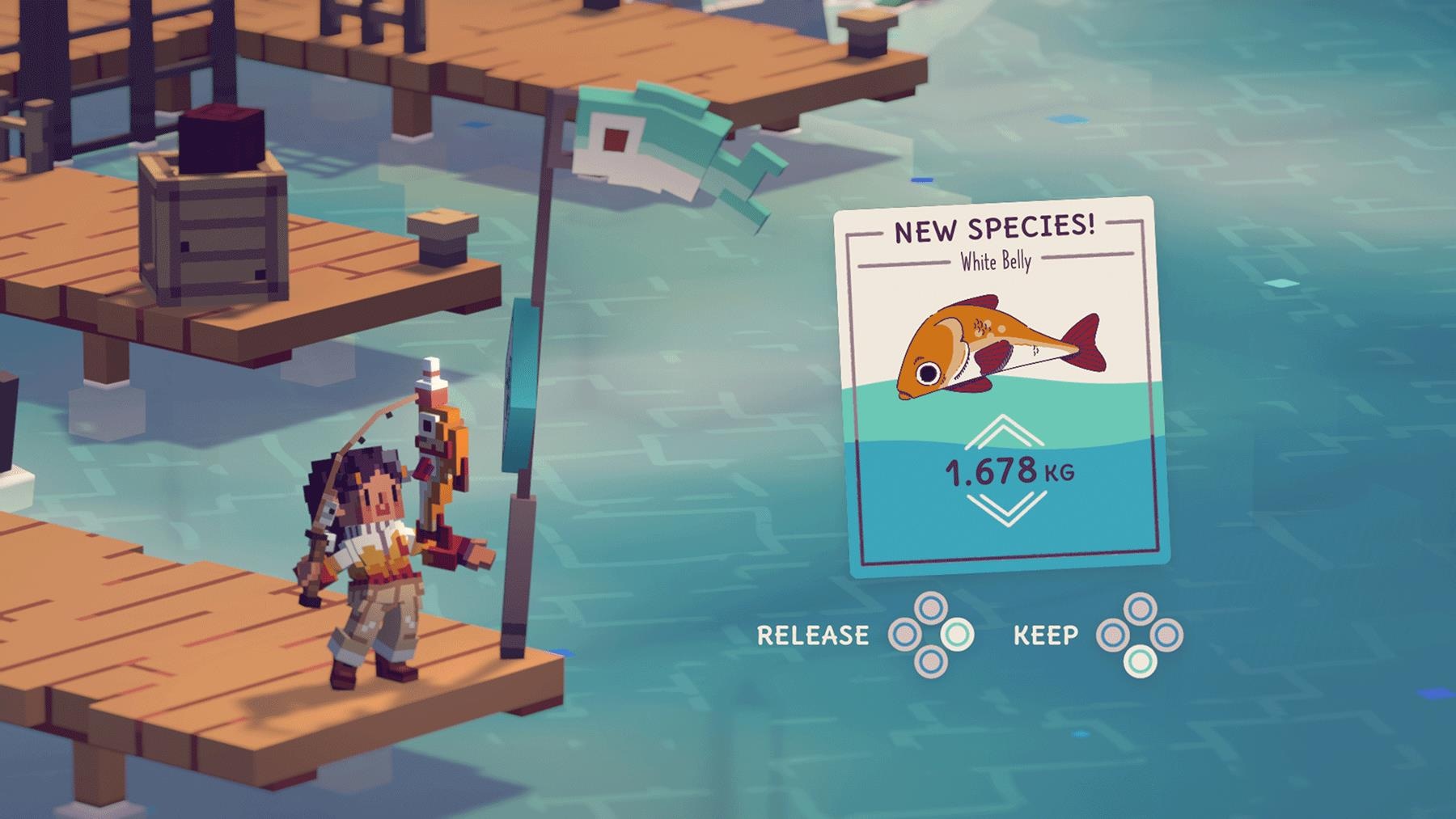 As hinted at in the trailer, Moonglow Bay is a “fishing town afraid to fish.” The townsfolk live in fear of the ocean outside the Bay, and this is what we’ll be investigating. The death of your character’s partner echoes through the story too, via the unsolved mystery of how they came to be lost at sea. “You’ll be uncovering the story surrounding various people in town while trying to solve your own mystery,” explains Soares. “In following these stories you’ll encounter mythical creatures that keep people in town awake at night. It’s gonna make use of your fishing skills but will very much put you to the test.”

How does Moonglow Bay play?

Exploration, fishing, and forming friendships all seem to be a major part of the game — as well as keeping an eye out for Mystical Monsters — while cooking comes with its own set of minigames. During Wholesome Direct, we got a glimpse of how Moonglow Bay’s friendship system will work. After a friend-to-be admitted that they hadn’t tried lobster, our character set out to catch it, then sailed home with it to clean and cook it, before delivering it to their new friend. The journal seems to be a key item in the game, and when friendships are formed, those friends will leave a mark or signature in it. It’s not just our character and their friends we’ve got to focus on, either, as we’ll also be helping to revitalise the town “by cleaning it up, filling the Aquarium, and helping the townsfolk.” The Aquarium in particular sounds as though it’ll be a real draw — it’ll have different floors with different habitats to house the creatures you catch, and you can come back whenever you like to check out what’s been donated. 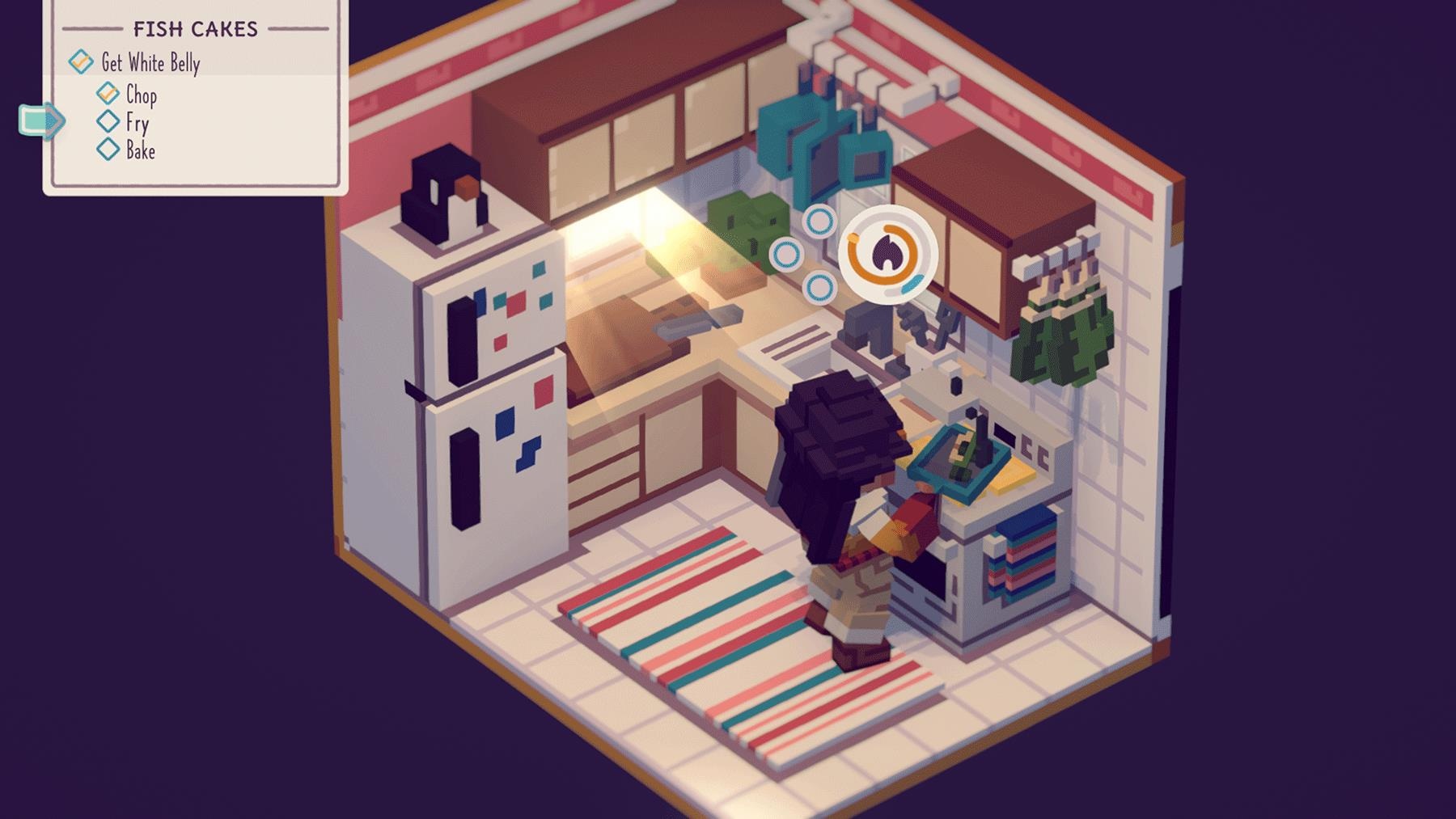 “I can’t wait to see how people will react to the town coming back to life and getting to know more about the townsfolk as you befriend and help them out,” says Nascimento. “I have always loved those aspects of games myself and I hope players will enjoy it as much as I do.” Soares, meanwhile, is most keen to see what players think of fishing. “Will they hoard and cook as much as possible, or will they lean on the side of preservation and maintain a healthy yield of fish? Also, once they get to the halfway point of the game, we open up the world quite a bit so I’m keen to see how they take that in!” Speaking of fish — Moonglow Bay boasts over 100 species of fish, ranging from the Piglet Bass to the wonderfully-named Jazzy Rabbit Fish.

Also, just as an FYI — we’ll be accompanied on our travels by a dog named Waffles, which I think you will agree is vital information.

Moonglow Bay is set in the 1980s — a setting which both Nascimento and Soares say is key to the tone of the game, since it represents a period before the internet and technology took off into the realm of “high tech.” “Being in this space lets the game breathe,” Soares and Nascimento explain. “It allows us to invent tools of our own and tie in progression with technology that can, but probably doesn’t, exist, and it doesn’t feel far-fetched. The 80s are also just far enough back in time to feel nostalgic to many but it gives us room to include marginalized groups that didn’t get a chance to live in the ‘magical 80s’ that was advertised in American mainstream media.” 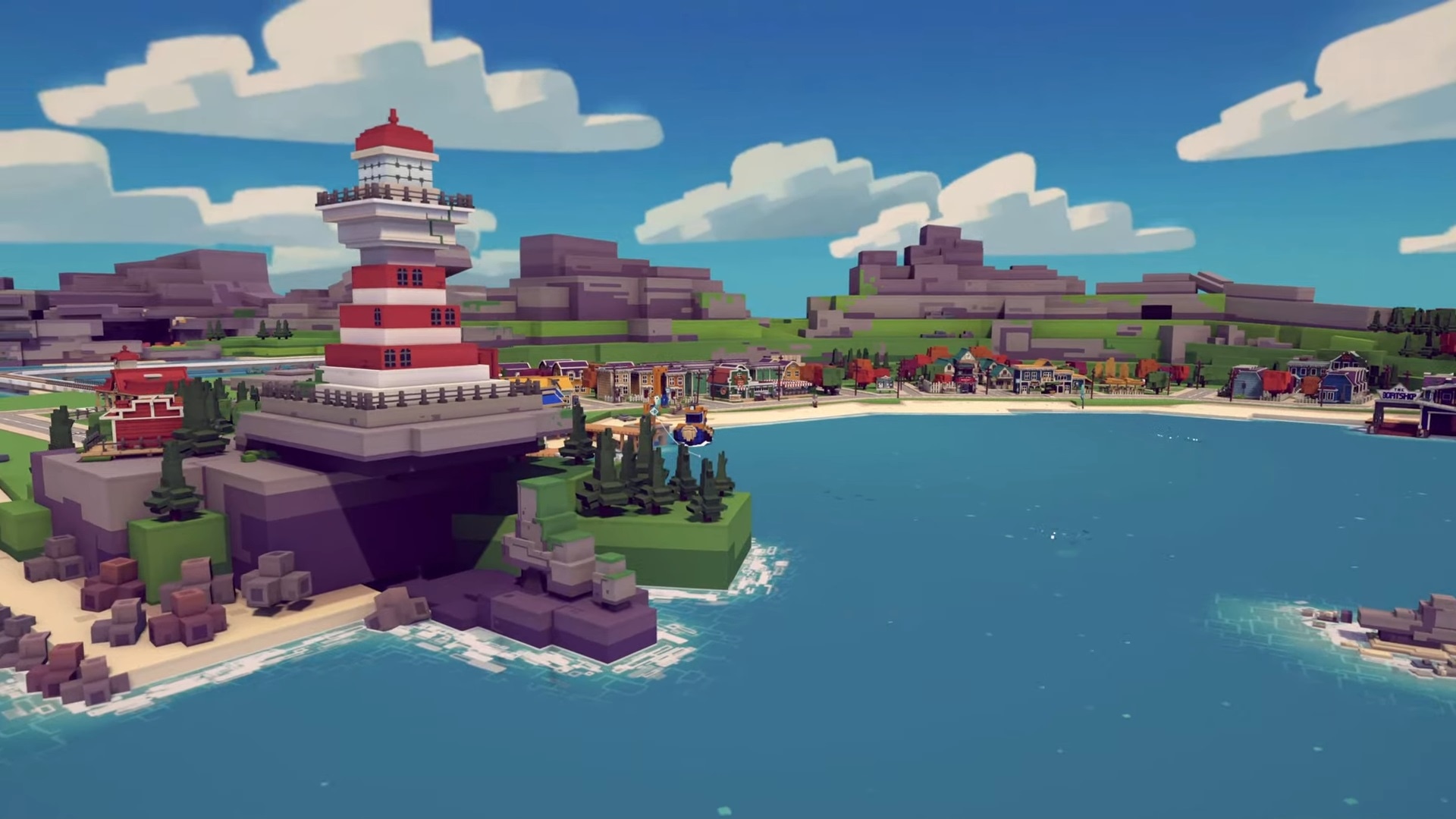 As for the world itself — Bunnyhug has been showcasing a few of the types of fish in Moonglow Bay via social media, and Soares says you might have noticed that they’re “not exactly ‘regular.’” The world of Moonglow Bay will have “multiple climates and environments, each with their own challenge to circumvent,” ranging from glaciers to geysers. Intriguingly, Soares adds, “It’ll have some light interaction with fishing but with some planning you’ll be able to take advantage of the weirdness in the water.”

Any news on Moonglow Bay achievements?

We don’t yet have the Moonglow Bay achievement list, but both Nascimento and Soares gave us a few hints about what we’ll need to do. “Designing achievements really came down to really making it feel like you’ve uncovered something unique,” explains Soares, adding that there will be some “typical completion achievements,” but that mostly, “the achievements are there to make you feel clever. You’ll read a lot of the titles of achievements and see it as a riddle, because that’s exactly what they are. We know how much meaning there is in achievements for some people,” adds Soares, “and we wanted to make them feel valuable, not just ones that require you to clear a story chapter or beat the game.” 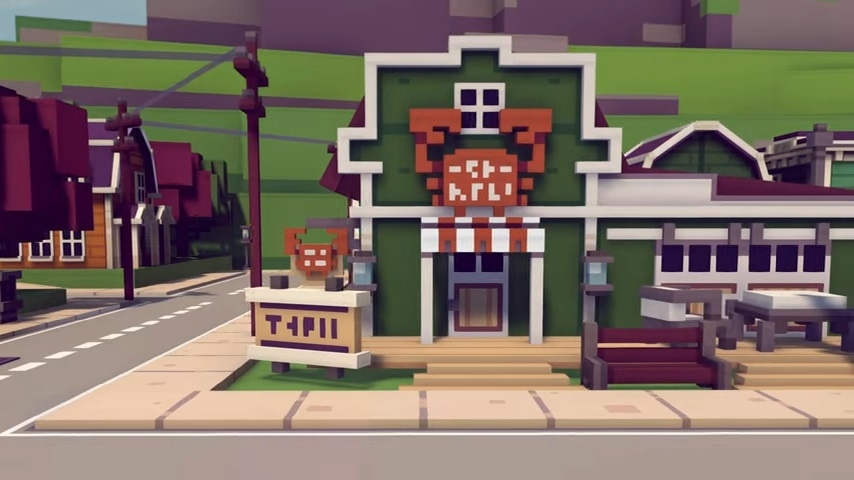 Moonglow Bay boasts over 100 species to catch and document, and we wondered whether we might find any achievements tied to documenting every species and experiencing every part of Moonglow Bay. “We didn’t want to lean too hard on number milestones like ‘you caught 25% of all species,’ explains Nascimento, “much more on fun combinations of catching groups of fish, or researching them, or even releasing them – with fishing being the heart of the game, a lot of the achievements are related to it.” Soares adds, “We’ve got completionist achievements pertaining to fishing for sure, but… some of the best ones are asking you to form a combinations of sorts. Almost like you’re creating a recipe to unlock an achievement.”

The Apocalypse Earthblood’ Is This Year’s Best Xbox 360 Game

Werewolf: The Apocalypse Earthblood feels like a competent remaster of a game I would have loved in 2006. Late in my playthrough, as I spent another hour ripping the limbs off of enemies and dodging […]

The latest Biomutant patch notes delivered a new batch of balancing and quality of life updates requested by the community, along with the usual laundry list of bug fixes. One of the shortest entries in […]

You may know Vin Diesel as Dominic Toretto, but to a legion of sci-fi fans, the actor is most loved for his portrayal of the prison-breaking, shiny-eyed Richard B. Riddick. Diesel has played the character […]